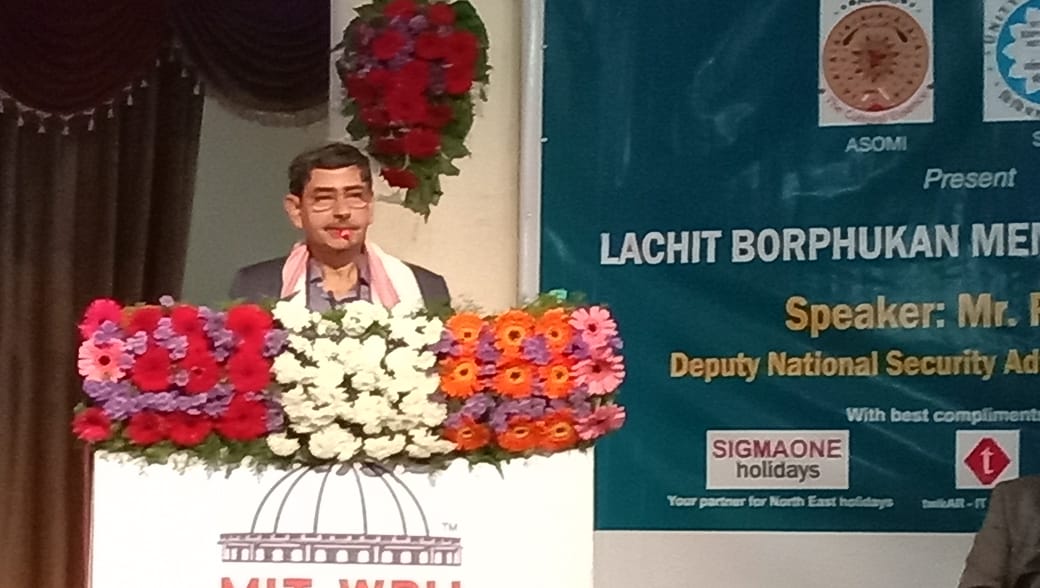 Clarity of vision in Govt policies and changing the format of thinking can bring the much needed development and societal change in the northeast India. This was stated by Mr. R.N Ravi, the Deputy National Security Adviser to Govt of India at the Lachit Barphukan Memorial Lecture organized by Asomi (The Assamese diaspora of Pune) and SEIL (Students’ Experience in Interstate Living) today at Pune. According to him the diversity of the nation was systematically destroyed by the Britishers by design. He stated that Britishers along with the East India Company had brought two other types of soldiers – the churches in the hills and the pseudo-anthropologists who were given sample villages to study. These people by virtue of their documentation have amply destroyed the richness of the diversity amongst the different tribes who have lived harmoniously for millennium in the past. These documents had become the point of reference for the post-independent Indian scholars which led to confusion and chaos amongst the different tribes of the country. Northeast since is at the crossroad of human migration has been worst affected by such biased anthropological studies which looked into the differences rather than the similarity amongst the various tribes which has led to secessionist forces in the region.

He however asserted that the present Govt won’t compromise with the separatist forces and would not have “unconditional talks” nor would have appeasement policies towards them. Process of law must prevail with the militants; he added. He said that during the previous 5 yrs 1000-1100 lives were lost due to insurgency in northeast but last year only 49 lost their lives due to the policy of the Govt.

Talking about the Dokhlam issue he said that China used to have psychological judgement of the politicians visiting each other state and create trouble. However due to the strict policy of the Govt, even after 74-days standoff they were forced to retreat back to their position. Talking about the National registrar of citizen and the citizenship bill he asserted the need to identify the real people who are threat to the identity of Assam and Northeast and deal with them. There should be clear distinction between threatening and blending.

Praising the role of Lachit Barphukan in driving out the asymmetric forces of the Mughals he said that Lachit was not only ahead of times in military warfare but was also statesman and a multifaceted personality.

Shri Atul Kulkarni, Chairman of SEIL had explained the role of SEIL in building a sense of national integration between northeast and the rest of the country and building a capacity development amongst the youth of the northeast India.

Welcoming the audience, Dr. Samiron Phukan, President of Asomi said that Asomi is thriving to build the bridge between Maharashtra and the North East. He compared Lachit with Shivaji of Maharashtra and opined that it was ironical that Lachit did not get his due in the history books of India despite the valour of keeping Assam free from the reach of the Mughals.

The vote of thanks was delivered by Rajib Borkataki, General Secretary of Asomi. He said that Asomi would definitely work towards building the intellectual discourse of Northeast in Maharastra.

This was stated in a press release by Rajib Borkataki, General Secretary of Asomi and Dr. Samiron Phukan, President of Asomi today.